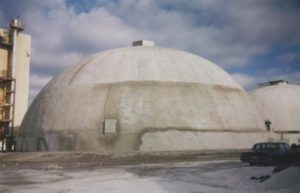 The salt evaporation plant stores rock salt in two concrete domes. One dome collapsed, and structural damage was identified on the second dome. AIG analyzed detailed “repair or replace” options, then managed the entire construction process to rebuild the dome, from design and building permits acquisition to field engineering and site supervision. The dome and conveyor had to be ready to receive bulk salt shipments by late October — but construction did not begin until mid-August. AIG met the schedule.